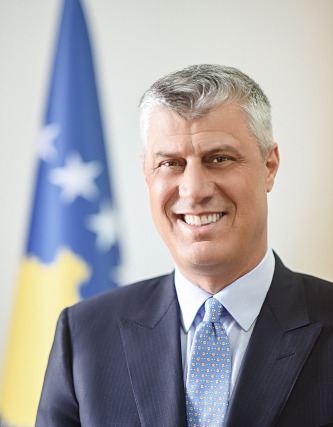 President of the Republic of Kosovo

Hashim Thaçi has declared Kosovo an independent state on 17 February 2008, and he also led the Kosovo team in the Rambouillet negotiations in February 1999 and he was the Political Chief of the Kosovo Liberation Army during the war in 1997-1999.

Thaçi was the most voted political leader in the elections of 8 June 2014.

As the Prime Minister of Kosovo, Hashim Thaçi led the political dialogue between the Republic of Kosovo and the Republic of Serbia, which on 19 April 2013 resulted with the signing of the Agreement on Normalization of Relations between Kosovo and Serbia.

For his engagement for peace and stability, Hashim Thaçi was nominated in 2014 for the Nobel Peace Prize, by American Congressmen and Senators, as well as by representatives for European Parliament.

Hashim Thaçi’s political career began with his engagement in the People’s Movement of the Republic of Kosovo (LPK), a political movement that aimed emancipation of the position of Albanians in the Former Yugoslavia.

In 1991, Thaçi was elected as the Student Deputy Rector of the University of Prishtina, where he contributed in structuring and developing of the parallel university education process.

Hashim Thaçi is one of the founders of the political-military organization, the Kosovo Liberation Army (KLA).

Since 1997, Hashim Thaçi was the Chief of the Political Directorate of Kosovo Liberation Army. Moreover, he chaired the Kosovo delegation in the International Conference held in Rambouillet, France, from 6 until 22 February 1999.

After the war, Hashim Thaçi was the Prime Minister of the Provisional Government of Kosovo in the period 1999 – 2000.

Hashim Thaçi was the member of the Interim Administrative Council (IAC), which was a joint governing structure of the UN Mission in Kosovo (UNMIK) and the Kosovo political spectrum, until 2001 when the first parliamentary elections were held in post-war Kosovo.

Hashim Thaçi was a member of the Unity Team, which represented Kosovo in the negotiation process during 2005-2007, led by the UN Special Envoy, President Martti Ahtisaari, which negotiated Kosovo's political status.

Following the victory of the Democratic Party of Kosovo in the parliamentary elections held on 17 November 2007, Hashim Thaçi was elected as the Prime Minister of the Republic of Kosovo. On 17 February 2008, Prime Minister Hashim Thaçi, in the Assembly of Kosovo, declared Kosovo an independent state.

Thaçi is the first Prime Minister of the Government of Republic of Kosovo.

Thaçi speaks English and German language
He was born on 24 April 1968 in the village of Buroje, Skenderaj.
He lives in Prishtina, Kosovo, with his wife Lumnije and son Endrit.